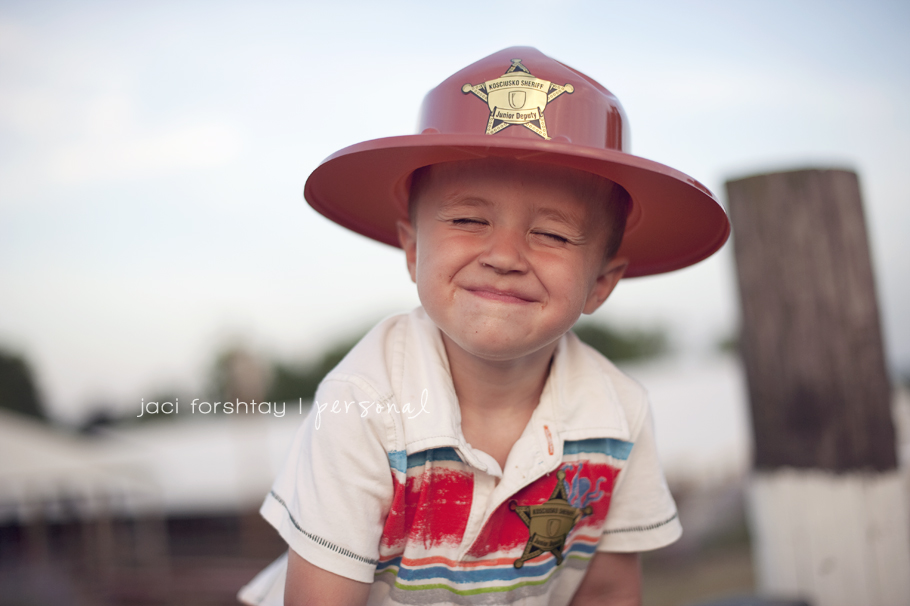 This week was the Kosciusko County Fair!  Tobe had taken the kids on Monday while I was having fun meeting with some photographer friends…but my Dad and stepmom were in town for the weekend so we dragged (drug??) them along for the ride.

We ate right when we arrived so we could throw up on the rides…ahem…I mean so we could have energy to RIDE the rides.  😉  Pardon the purple spot on his chin – it’s amazing to me how kids can transfer hand stamp ink to random places on their body within 5 minutes. And meet my daughter, who looooooooooves to get her photos taken.  lol  This was pretty much the best out of 7. It was time to walk around and decide which rides to go on! NOPE.  Not this one.  I will never set foot on one of these suckers.  The sitting upside down for a few second thing doesn’t sit well with me. I actually REALLY like this one – but alas, my kiddos need to gain a few more inches before we can manage to ride.  I’m sure that day will come faster than I can imagine. This is the first year that Jacob has been tall enough to ride the rides on his own!  Woohoo! Tobe and my Dad, supervising. While walking around, I managed to snap a few shots of randomness…seriously, if I knew the FAIR had iPhone accessories, I wouldn’t have bothered to buy them at Verizon!  😉  AND car  chargers.  darnit. And here’s another beauty.  Who, just WHO buys these ugly things?  (Sorry if you’re one of those crazy people who has like 17 of them.)  Tobe, honey, can you buy me a spray painted visor that says “I’m with him”??? I digress….back to the rides.  Here’s Pappy with the kids on the pre-dizzying Dragon Ride.  So glad I was not on there with them.  🙂 This slide is fabulous – I have to admit, I had a little anxiety climbing up those rickety stairs though.  Eep. Lastly was the ferris wheel. I think we have a future roller coaster junkie on our hands! Now would be a good time to mention this guy.  Jacob stalked him the whole night (we saw him at least 6 times)….my son, if you didn’t know is a cowboy.  He has boots, a gun, and a cowboy hat.  So, when this fella walked by us in his cowboy get-up, Jacob couldn’t take his eyes off of him.  🙂  And apparently, the guy in the blue shirt felt the same way.  😉 A quick break for some cotton candy.  And Leah has officially warmed up to my camera again.  🙂  (I actually try not to point it at them too much…I don’t want them to remember me as the lady who had a big black thing in front of her face during every little outing we took – yes, it’s totally important to me to capture their lives but for me, it’s important to enjoy being a mom and experience life WITH them, not in front or behind them shooting the entire time.)  WoW.  Stepping off of my soapbox now. As I mentioned earlier, Tobe brought the kids on Monday to mainly see the animals – by the time Friday rolls around, most of the animals are gone.  This little piggy was still around for a quick shot though. One thing I have thought about lately is that I need to get out from behind the camera more and IN photos with our family!  It’s kind of hard to remember to hand the camera to someone else!  So, here’s our Fair Family Portrait. Every year, there is a cool Big Cat Encounter show…of COURSE I would have loved to jump up in front of everyone and actually get a great shot of this gorgeous lion but the rest of the audience may have perceived that to be rude.  This guy’s name was Handsome.  🙂 And even though his jokes were the same ones he told last year, they were still pretty funny.  The kids thought he was hilarious. Aside from being a cowboy, Jacob also plans to be a firefighter and a policeman.  So, this hat was totally fitting.  And he wore it proudly. I would place bets that my son is one of the goofiest (and the coolest) chap around. And the night ended with Sheriff Forshtay, making his rounds.